Lost Between and Hitting It Big Contest

It's me...and I am announcing a contest. I have two releases in July (although one is at the very end of the month), Rather than having two separate contests I am having one for two winners. I will give an ecopy (format of your choice) of Lost Between to two winners on July 10th when it releases and than an ecopy of Hitting It Big when it comes out July 31, 2011. So two winners win both books (Hitting it Big is a very short story). 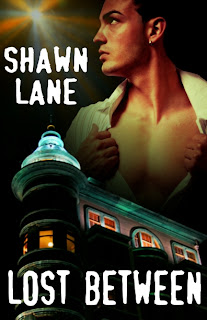 Famous horror author Curtis Macintyre has recently rented an apartment in an historical building in San Francisco. But the apartment comes with more than just old charm. It also comes with the spirit of Aaron Carmichael, a man murdered five years before.
After Curtis visits a medium, Aaron’s spirit comes to him and asks for his help in finding peace since he’s lost between two worlds, the living and the afterlife. When Curtis decides to visit Aaron’s boyfriend, Robbie Henley, a beautiful hairdresser, Aaron comes along...inside Curtis.
Now with Robbie’s help, it’s up to Curtis to find out what happened to Aaron so he can finally have peace. And maybe, together, Curtis and Robbie can find their own happily ever after... 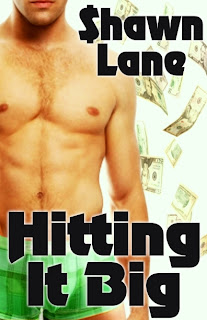 Six years ago, Billy Grant had a night he never forgot losing his virginity to the jock of his dreams, Mitch Crestfield. But Billy fled afterward, not wanting to hear Mitch’s regrets.
Now Mitch has hit it big, winning the lottery, and Billy finds himself invited to Mitch’s celebration. When Mitch suggests another night of passion, Billy can’t seem to resist. But Mitch has something more than one night in mind...

Contest runs from June 29- July 08. Winners will be chosen randomly. Add your name in comments.
Posted by Shawn Lane at 4:00 AM