Here is an excerpt from the beginning of Pieces. Skip if you don't like to read excerpts. 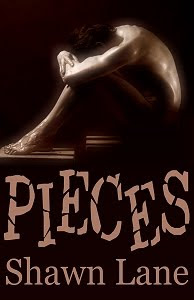 Joshua Stevens picked up a bar towel and rubbed the highball glass, his gaze fixed on the patron sitting in the darkest corner of the bar. The man was hunched down in the booth, his expression sullen, his eyes downcast, staring at the drink in front of him.

“Why don’t you go over and talk to him?”

He turned to his brother, Eddie, the co-owner of the bar. “Not sure that’s a good idea. Not at the moment, anyway.”

Eddie, who was older than Josh’s twenty-eight by three years, reached up and grabbed a bottle of rum from the top shelf directly above Josh. “Someone’s going to have to give him a ride home, anyway. Might as well be now. “

Every year—well, for the last three—this particular patron came to their bar on this exact night. The bar, formerly known as Bill’s, had been the place they’d all hung out together at one time or another over the last several years. So much so that eventually Josh and Eddie had purchased the bar and renamed it, EJ’s. That was before Andrew’s death.

“Can I get some more peanuts?” a customer on a barstool called out.

“Sure.” Josh grabbed the empty bowl, filled it with cocktail peanuts and then set it in front of the man.

It was getting late, almost one o’clock, and the bar had mostly emptied out. Besides Peanut Man and the man in the dark corner, there was a couple cuddling in a booth just to the left of the bar.

Eddie poured rum and Coke into a glass and then nudged Josh. “Go on. Why don’t you take him? I can handle what’s left and close up. Unless, you’d rather we call him a cab?”

“No, I’ll get him home.” Josh tossed the towel down and walked around the corner of the bar, picking up used napkins and other trash as he went and discarding it along the way. As he approached the dark corner, the man didn’t even look up. He just continued to stare at the drink.

“Hi, Patrick.” Josh sat across from him.

Patrick Donovan’s gaze slowly rose to look at Josh. His blue-green eyes didn’t focus. In fact, he appeared to be looking over Josh’s shoulder.

Three years ago this night, Patrick’s longtime lover hanged himself. Patrick had the extreme misfortune of discovering Andrew’s body. Josh had been well acquainted with both Patrick and Andrew. His mother and Andrew’s mother were sisters and he, Patrick, and Andrew had all gone to high school together.

Josh reached across the table and covered Patrick’s hand with his. “It’s Josh.”

Patrick blinked, and then ran his long fingers through his chin-length sandy blond hair. “I know.” He looked away.

“Come on, I think you’ve been here long enough. I’m going to drive you home.”

Still not looking at him, Patrick whispered, “What about Eddie? Why can’t he drive me home?”

Josh sighed. “He would’ve, except you broke his nose the last time. He won’t do it again.”

“I said I was sorry,” Patrick said with more than a touch of petulance.

“I know. Still, I’m taking you home.” He gestured to the drink he had left. “I think you’ve had enough. Want me to take that away?”

Patrick didn’t bother to answer, so Josh just scooted it across the table. Josh rose and placed his hand under Patrick’s arm, pulling him up out of the booth.

On the one hand, Josh was glad for the man’s unexpected subdued manner, as he’d gotten violent in the past when someone tried to extract him from the bar. But it also troubled him. Patrick seemed even more despondent than usual.

Patrick was shorter than Josh’s six-foot-two frame by several inches, only reaching to about Josh’s shoulders. Back in high school, when Josh, Andrew, and Patrick had been pretty much inseparable, Patrick had been the smallest.

The man slumped in his arms and Josh had to lunge to keep him upright. “Easy, Patrick. I’ve got you.”

“Need help?” Eddie yelled from behind the bar.

Josh just shook his head. He knew well enough why Patrick preferred Eddie’s company on the way home. Andrew, being their cousin, had resembled both Josh and Eddie, but Josh looked more closely like Andrew. They’d been about the same height, the same age, the same muscular build, and had the same shade of sable hair and brown eyes. To Patrick, Josh was a constant reminder of Andrew.

He got the other man to walk toward the exit with only a small amount of resistance. When they’d reached the door, Josh glanced back at the bar. The couple looked like they would be leaving soon, the man holding the bar tab in his hand. The man eating the peanuts had half his drink left, but the man was a regular so Josh didn’t have any concerns
.
“I’ll see you tomorrow, Eddie.”

“Yeah. Drive carefully and call me if there are any problems.”

Josh buckled Patrick into the seat belt of the passenger side of his old beat-up truck. One of these days he would replace the damn truck, but it still ran pretty well even if it wasn’t exactly pretty.

“I’m fine. And I’m only a year younger than you. Not even. Just a few months.”

“I know, but you’ll always be a kid to me.” Josh got in and started the truck. Patrick’s condominium was less than ten miles from the bar. Not many cars on the road this time of night, but Josh decided there was no need to speed. He’d rather they make it to their destination in one piece.

Over the years, first as a patron of the bar and now as co-owner, Josh knew a few people had wandered out of the bar having drunk more than they should. Early on in their ownership, he and Eddie had decided to continue the previous owner’s free cab ride home policy. They’d used it a few times. But that didn’t deter everyone and there had been a few nasty accidents on this road.

Patrick leaned heavily on the passenger door, his head resting against the cracked window.

“Do you think you might be sick?” Josh asked. “I can pull over.”

“As much of a piece of shit as this truck is, do you think anyone would notice if I puked inside?”

He winced over the surly tone. Apparently the detached Patrick had been replaced once more by the hostile one.

Josh didn’t quite believe him, but didn’t see how arguing would help. If Patrick got sick all over himself and Josh’s truck, he’d make Patrick clean it.