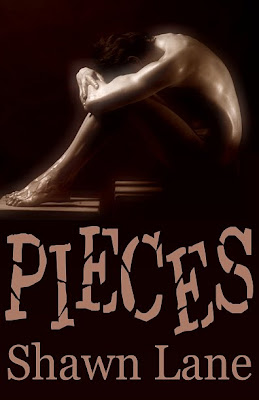 I'm going to go ahead and start the contest to win a copy of Pieces now. Here's the blurb:

Patrick Donovan has spent the last three anniversaries of his lover’s suicide getting drunk at Josh Stevens’ bar. It’s at the bar he feels closest to Andrew, the man he misses, as well as to the man he has truly loved since high school, Josh, his dead lover’s cousin.

Troubled by Patrick’s annual visits to the bar, Josh encourages the man to put the pieces of his broken life back together and move on from his grief. Though it’s clear to Josh that Patrick yearns to move on with him, he wants no part of it. He’s avoided long-term relationships and knows the last thing he should do is get involved with Patrick, especially when he believes the man’s shattered heart still belongs to Andrew.

But Josh changes his mind once Patrick takes his advice and begins dating other guys. Despite his fear of committment and becoming a substitute for Andrew, Josh can no longer ignore his growing feelings for Patrick. Will he be able to let the man go, or will he eventually surrender to the notion that Patrick is perfect for him after all?