Andi Anderson is the author of the adorable Got Mistletoe?, which was part of Dreamspinner Press’s 2009 Advent Calendar of Holiday Stories. Andi’s story was popular among readers and already she has developed a devoted fan base anxious to read more romances from her. 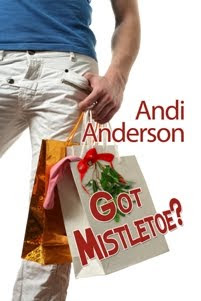 Recently, Andi accepted a contract offer for her novella, A Realistic Romance. She’s still waiting on a release date for this story coming from EXtasy Books.


First, thanks Andi for agreeing to be interviewed.

1)What made you decide to progress from reading M/M romances to deciding to write your own stories?

Ever since I can remember I’ve been a very active reader. My sister mentioned the other day that she can’t remember a time when I didn’t have my nose buried into a book. That still holds true today. I think that writing is a natural extension of reading for me. I’ve always wrote stories either for myself or for friends, but never considered trying to get anything published. When I saw the open call for submissions for Dreamspinner’s Advent Calendar stories I thought I would give it a shot and go for it!

2) In the beginning, you read M/F romances, what was it that drew you to the exciting world of M/M?

I had been a die hard romance reader since I read my first romance novel at age 13. When I got married in 2002, I stopped reading for several years for some unexplainable reason. When Chris and I went to Las Vegas a few years ago, I picked up an erotic romance and was hooked. But, as time went on, and the more books I read the more I became extremely frustrated with the heroines. They either fell into that too stupid to live or bitch from hell category. I became restless and to try something different, I had picked up a M/M/F ménage book written by Amanda Young, and loved the dynamics of the two men together. After that, I really started exploring M/M romances and I’ve never looked back.


3) Do you still read M/F or are you strictly reading M/M now?

I don’t read M/F at all anymore. I’ve honestly tried to read M/F romances, but I just can’t stay interested in them at all. Plus, I firmly believe that M/M authors are some of the best authors out there.


4) Where do you get your ideas for the stories you create?


From anything and everything. My mother used to say my head was in the clouds all the time, and she was right. I’m always imagining different scenarios in my head. I really think I need to keep a small notebook with me when I’m not on the computer! I can’t tell you how many times I’ve thought of some great scene and the minute I sit down, I forget what I had thought of.


5) Are there subject matters that are taboo for you in your writing?

I don’t like ménages. I know it was a ménage based story that led me to this genre, but I’ve never really liked them, I was just trying something different, so I know if I even attempted to write one it would be horrible because it’s something I don’t like to read myself.


6) You are happily married, do you find your husband is supportive of your writing M/M? Do you think he reacts any different to you writing M/M as opposed to M/F?

LOL! Chris is your typical down home, blue collared, down to earth southern man. He’s more comfortable in jeans than a suit. One thing I love about him is, he is very open minded and liberal about equal rights for everyone, despite living in a small southern town. He’s always known that I wanted to write, and has been very encouraging to me to get off of my ass and do it. When I told him I wanted to write a gay romance he just basically patted me on the back and told me to go for it. Once Got Mistletoe was published, he asked if I ever would switch over to writing straight romances. When I told him no, he told me he wasn’t surprised and was more than cool with it. He’s very proud of me and has been very supportive of my writing. I really couldn’t ask for a better husband.


7) It was exciting to see that you’ll have a new release later this year. What else are you working on?

Thank you! I appreciate all of the encouragement and support my online friends have given me. I really couldn’t ask for a better support group than what I have. I’m actively working on two blue collared themed novels I plan to have done in a few weeks. I’m also about to start Samuel brother, Sidney’s, story and I have a May/December romance I’ve been working on.


8) What is your writing routine? Where do you write? Do you set aside times for it?

I don’t have a routine. I really need to sit down and set a routine for myself. I basically do my writing at night. When Chris is home I have a horrible time concentrating because he wants to monopolize my time. I have a laptop that I write on in the living room. I usually have some music or the television playing in the background, other than that I have no set times. *hangs head in shame*


9) Do you find other authors of the genre inspirational?


Very much so! I truly believe that this genre has the best authors writing for it. Plus, it’s fantastic writers like you, Ava and Devon who continue to teach and embrace newbies like myself how to be wonderful and considerate with their readers. I really love the support and encouragement that we give to each other. There is no cattiness or jealousy at all. It’s great that we all genuinely want each other to be happy and successful. I love that.


10) You are a voracious reader of the M/M genre. What do you think of authors who write M/M but never read anyone else’s work?

UGH! That really ticks me off! How in the world can someone write something they don’t have a love for? I don’t understand it. I’ve heard of some authors refusing to watch gay movies or look at gay couples in pictures together because it disgusts them. I find that it’s that kind of thinking that is disgusting. They are hypocrites and I think it will show in their work.


11) Do you feel you have to have a real love of the genre to do it justice? What do you think of writers who decide to jump on the M/M bandwagon because they think it’s a good way to make money?

I don’t know. I hope I will do it justice and people will really enjoy what I write, but only time will be able to tell that. Realistically, my style of writing won’t be for everyone and I’m okay with that. I do think I’m writing for this genre for the right reasons and not for the wrong ones. I truly love this genre and I don’t think it gets enough credit. And, as hokey has this sounds, I don’t do it for the money at all. I’m very proud that I had a book published, but I know realistically there aren’t many very writers, popular or not, who can do this full time and make ends meet. So, I don’t know why anyone would do it for the money.


12) When are you going to get an Andi Anderson website?

Hopefully soon. I am so computer illiterate it’s pathetic. I look at my little blog compared to some of my friends and wonder how in the world they made look so cool and interesting! I do plan on getting one up soon, it’s really just a matter of time and me figuring it all out.


13) Many fans of the genre can’t help imagining unusual pairings of popular men in movies and television or even in books. For instance Kirk and Spock from Star Trek, Harry and Malfoy from Harry Potter, Aregorn and Legolas from Lord of the Rings. Are their any imaginary pairs you are fond of yourself?

I think the Twilight books and movies would be far more interesting if Edward and Jacob dumped Bella and got together. Talk about hot!


14) If you could revisit any pairing in an M/M you have read, who would it be?


I revisit my favorites quite often! Scott and Keegan from Eros Rising, Biton and Cavan from 30 days, Kyle and Dave from Beyond the Norm, Kevin and Michael from Car Wash, Aiden and Nate from My Fair Captain, Ethan and Jamie from The Tin Star, Keaton and Chay from Without Reservations, Oliver and Vincent from Bound to Him, Mark and Pablo from Second Sight, Hell and Brent from Heaven Sent: Hell, Jael and Quan from Where Flows the Water, Will and Jack from Handyman and Jordan and Alec from the Curtis Reincarnation.

LMAO! Yes! Recently in fact, but I love him anyway.


16) Do you like pretty boys (like another author we could mention) or do you prefer muscular he-man types who turn to jelly when the right guy comes along? Or are both yummy as hell?


I prefer pretty boys. I do like it when tough guys turn to mush over a pretty boy. That is yummy as hell! Lol!

17) Do you like sensitive heroes or do you want someone like John Wayne who just so happens to want to boink men?


That depends on my mood. I like both. Especially together!


All right, thanks for answering my questions, Andi. Especially the silly ones. We’re all looking forward to many future releases from you.


Thank you, Shawn! I’ve had a blast answering your questions! *Hugs*